At ICCR’s 50th Anniversary Gala on March 31st at 5:30 pm EST, we will gather with our extended community of members, friends, and allies to honor the legacy of our faith-based founders as well as the new generation of innovators who are shaping the future of ICCR’s work in shareholder engagement. 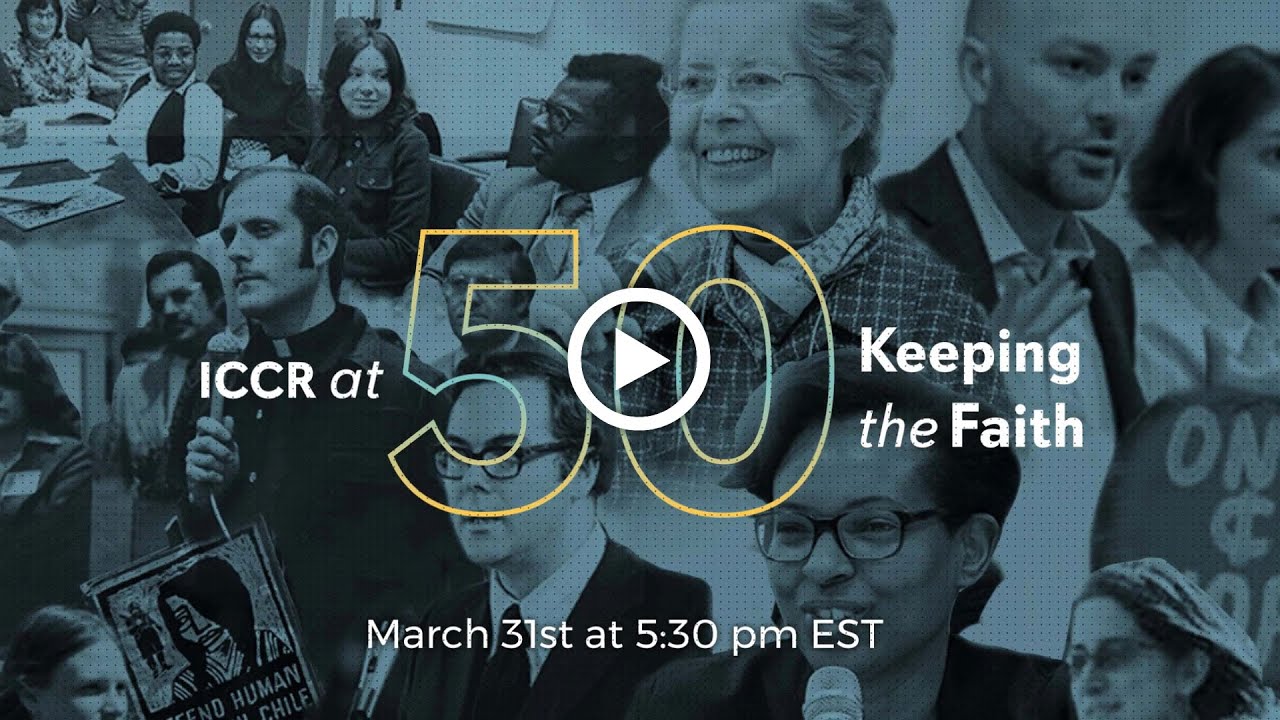 Please join us virtually on March 31st at 5:30 pm EST for a remarkable evening to celebrate what the ICCR community has achieved through 50 years of Keeping the Faith.

When the Episcopal Church filed a shareholder proposal at General Motors asking the company to sever business ties with South Africa until its government abolished its racist apartheid system, little did they know they were birthing an organization and catalyzing a movement that would endure for 50 years. The Interfaith Center on Corporate Responsibility continues to be at both the forefront and center of global investor efforts to promote a more just and sustainable world with a global membership of over 300 faith and values investors representing more than $4 trillion in assets. ICCR members continue to have an outsized impact, forcefully and persistently making the case for corporate accountability on the significant issues of the day impacting people, communities, and the planet. Current challenges only serve to underscore that our work has never been more relevant or more needed.

Join us the evening of March 31st when our community will commemorate our five decades of achievement to foster greater corporate accountability with a great sense of accomplishment and enormous gratitude for those who have supported us on this amazing journey.

See our Timelines of Achievement

We will be joined by several guests who will underscore the continued relevance of the faith and values investor community to help catalyze corporate change that benefits both people and planet and will inspire us to keep our faith for the road ahead.

The Most Reverend Michael Curry

The Power of Diverse Voices United in a Common Witness

Keynote Address: Keeping the Faith During these Turbulent Times

A Message of Hope and Call to Action Presented by Tim Smith and Paul Neuhauser, ICCR will honor the organizations that founded ICCR 50 years ago planting the seeds that would give rise to the shareholder advocacy movement of today: The ICCR Legacy Award was created to honor those whose work has provided a strong moral foundation and an enduring record of demonstrated influence on corporate policies. The 2021 Legacy Awardee is Rev. David Schilling, ICCR’s Senior Advisor, whose 27 years of impact working on behalf of ICCR members has left an indelible mark on the organization and on the field of shareholder advocacy.

David’s 27 years of impact at ICCR has left an indelible mark on the organization and on the field of shareholder engagement. His many achievements and the strong connections he has made both within and outside the confines of ICCR provide more than ample evidence that his legacy will endure and serve as a role model for the ICCR agents of change to come. David joined ICCR’s staff in 1994 already having built a formidable legacy as a faith-based social justice and human rights advocate through his work with Cesar Chavez to build support within the religious community for the farm workers’ struggle for justice, as co-director of the Riverside Church Disarmament Program in New York City, and as program coordinator of the Fellowship of Reconciliation-USA.

David has been a principal figure and thought leader in the ICCR community, designing and leading innovative initiatives too numerous to mention that have transformed our work across issues and sectors. It is not hyperbole to say that as a result of David’s lifetime work, the “S” in ESG is increasingly receiving the attention it merits, and the lives of rights-holders around the world will be vastly improved. David will always be a leading voice in the field of corporate engagement and a devoted and compelling ambassador for the work of ICCR and its members.

We’re providing two ways to support ICCR’s work: A gift that honors ICCR’s five decades of shareholder advocacy or a gift in honor of ICCR’s Annual Legacy Awardee, Rev. David Schilling. A gift of $250 and above includes Gala registration. Either way you choose to give, we are grateful for your generous support!

Or, Donate Without Registering for the Event Here.

Inspired by faith, committed to action

As part of our ongoing 50th-anniversary celebration, we are pleased to share our series of interactive web timelines lifting up ICCR members’ 50 years of advocacy on human rights, the environment, racial justice, health equity, corporate governance, and financial services.